Genetic reproductive technologies are being used by individuals who, for a variety of reasons, wish to know and/or have some choice about the genetic makeup of their children. A number of techniques allow doctors to obtain genetic material from a fetus in the womb and perform genetic analysis on it. At the same time, the development of technologies to create embryos in a lab – the process of in vitro fertilization (IVF) – has also led to an ability to perform genetic analysis on these embryos before implanting them into the womb. These reproductive technologies allow us to screen, select, and perhaps one day, modify offspring to eliminate deadly or debilitating diseases. At the same time, they also raise issues regarding disability rights, discrimination, and eugenics.

First performed in 1990, preimplantation genetic diagnosis (PGD) is a process that allows an embryo created by IVF to be tested for various genetic markers. Based on the results of the tests, one or more embryos can be selected for transfer into the uterus.

PGD can be used to assess whether an embryo has the genetic mutations that are associated with fatal childhood diseases, such as Tay-Sachs and cystic fibrosis, as well as adult–onset diseases, such as Huntington’s disease and breast cancer, with the goal of avoiding those diseases. Typically, a single cell is removed from an 8-cell embryo and tested. Any embryos that are free of the genetic mutation for which they are being tested are then considered for transfer into the womb. Thousands of healthy children have been born as a result of this technology, free of the genetic diseases that have, in many cases, devastated the older generations of their families. At the same time, PGD has raised ethical issues, as it gives individuals the capacity to select one embryo over another. For example, there has been controversy about the use of PGD for assessing and selecting the sex of embryos for “non-medical reasons,” or for selecting embryos with respect to traits seen by some people as disabilities, such as deafness or dwarfism.

A widely publicized case related to PGD is that of the siblings Molly and Adam Nash. Molly was born in 1994 with a deadly disorder called Fanconi anemia, which disrupts the ability of cells to repair their DNA. Molly needed a stem cell transplant to save her life. Molly’s parents, who wanted another baby, decided to conceive a child using IVF and PGD so that they could increase their chances of having a child without Fanconi anemia, who would also be a perfect donor match for Molly. This is how Molly’s brother, Adam, was conceived. When Adam was born, his umbilical cord blood stem cells were given to his sister. The Nash family was the first in the United States to go public with their use of PGD and donor matching. Molly was able to receive this treatment without government approval. Since the transplant, Molly has recovered and both children are doing well.

There are also a number of techniques that can be used to obtain and analyze DNA from fetuses. Amniocentesis and chorionic villus sampling (CVS) are common prenatal tests that are carried out to reveal information about the developing fetus. Both are considered invasive procedures. An amniocentesis involves inserting a large needle through the pregnant individual’s abdomen, uterus and then the amniotic sac to obtain fetal DNA. CVS is performed vaginally or via a needle through the abdomen to collect fetal tissue from the placenta. Both procedures carry a small risk of carriage (how small remains a matter of debate, but could be anywhere from a .005% to 1% chance).

More recently, methods for non-invasive prenatal testing (NIPT; also called non-invasive prenatal screening / NIPS or prenatal cell-free DNA screening) are being developed. Cells of the placenta, the organ connecting the fetus to the mother that facilitates nutrient uptake and waste disposal, sometimes break open, releasing fragmented fetal DNA into the blood. This “cell-free” fetal DNA can then enter the mother’s bloodstream. There, it mixes with cell-free DNA that has been released from cells in the mother’s body. Cell-free fetal DNA makes up around 10% of the cell-free DNA found in the mother’s bloodstream. A blood sample taken from the mother’s arm, usually from around 10 weeks of pregnancy, will contain cell-free fetal DNA. The cell-free DNA extracted from this blood draw can be sequenced, and then analyzed using computer algorithms to reveal information about the developing fetus. Because NIPT is done on a blood sample taken from the mother’s vein, it is a non-invasive technique that does not increase the risk of miscarriage. 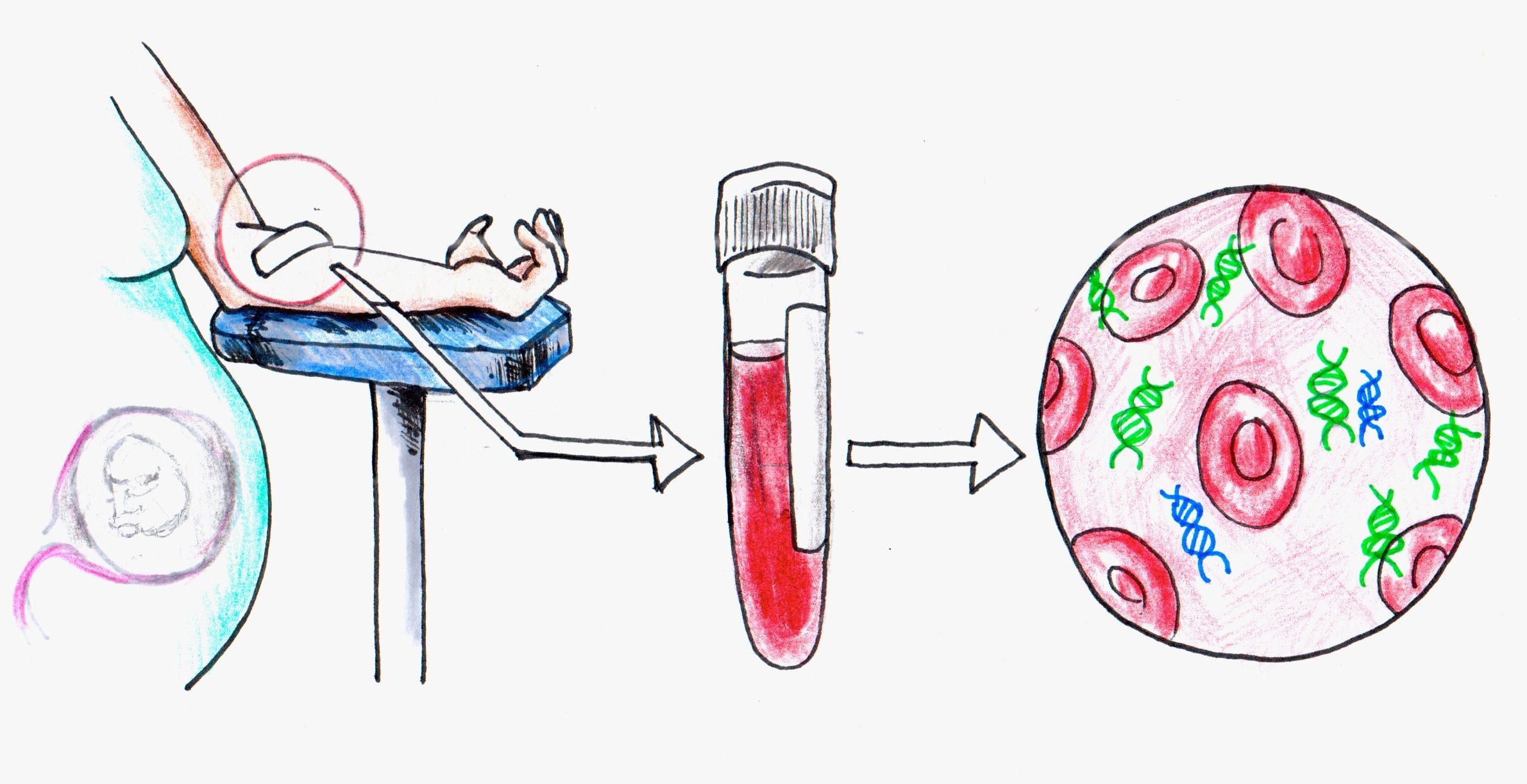 NIPT has been available for clinical use in the US since October 2011. The technique is most commonly used as a screen for extra or missing copies of certain chromosomes (a condition known as “aneuploidy”). One of the most common of these conditions is Down syndrome, where the fetus’s cells contain three copies of chromosome 21.

It is important to note that NIPT results are not definitively diagnostic. If a positive test result is returned, the pregnant person will need to consider whether to undergo further diagnostic tests (such as amniocentesis) to find out for sure – tests that do carry a miscarriage risk. Similarly, a negative NIPT result means that these chromosomal conditions are less likely, but does not completely rule them out. The likelihood that a positive NIPT result is truly positive varies for different conditions and for individuals of different age groups (because aneuplodies are usually more common for individuals of advanced age). For a more technical discussion, see here.

Because NIPT cuts down the miscarriage risk of prenatal testing, academic and professional organizations such as the American College of Medical Genetics and Genomics are recommending that this screening test be offered to pregnant individuals before invasive tests are considered. But similar to PGD, NIPT raises a number of ethical issues, especially given the ease with which a blood test can be performed and the number of consumer genetics companies that are beginning to offer this service. Advocates for the Down syndrome community have voiced concerns about the possibility of increased termination of fetuses found to have Down syndrome, as well as increased stigmatization of individuals with the condition.

NIPT results can be complicated, particularly when unusual findings occur. For example, in very rare cases, NIPT has detected cancer in the mother. This can present challenges in education, counseling and informed consent for doctors, genetic counselors and patients.

Generally speaking, genetic reproductive technologies currently do not modify the genetic make-up of an embryo — that is, they do not alter, add or subtract genes, but is instead a tool for assessing the genes that already exist in an embryo. However, recent advances in technologies for “editing” genomes and for working with embryos are raising the possibility that, one day, we can modify embryos to eliminate diseases such as sickle cell anemia or Huntington’s. An international summit on “germline genetic modification” (making genetic changes, for example in eggs, sperms or embryos, that would be inherited by subsequent generations) attended by scientists and ethicists recommended against any clinical use of this technology for the time being. However, using the technology in embryos for research purposes has gone ahead in countries such as the United Kingdom, Sweden and China (in addition, existing laws or guidelines in these countries only allow research on embryos up to 14 days after fertilization).

One procedure for changing a child’s genetic makeup that has already moved to the clinic is “mitochondrial replacement.” Mitochondria, the “power plants” of our cells, actually contain small amounts of their own DNA (the majority of our DNA is located in the cell nucleus). Genetic mutations in mitochondrial DNA are known to cause a number of hereditary diseases. Because an individual’s mitochondria normally are only inherited from their mother, a possible way to treat diseases caused by mitochondrial DNA mutations is to replace the mitochondria in an egg cell before using IVF to conceive a baby. This involves taking the nucleus from the mother’s egg, then placing it into a donor’s egg that has its nucleus removed. A baby born this way will inherit DNA from three people – the father’s sperm, the mother’s egg nucleus, and the donor’s egg mitochondria – giving rise to popular terms such as “three-parent baby.” And because subsequent offspring of the child will inherit the donated mitochondria (along with their small, but important, contribution of DNA), mitochondrial replacement therapy is considered a form of germline genetic modification.

In 2015, after many years of public debate and consultation, the UK became the first country to allow mitochondrial replacement. An expert panel convened by the US National Academies recommended in February 2016 that mitochondrial replacement be allowed in the US, but only for male embryos – because a male’s sperms do not pass on mitochondria to any future offspring. However, regulatory authorities in the US have not yet approved the procedure. In September 2016, reports emerged that an American medical team carried out mitochondrial replacement for a Jordanian couple, giving birth to a baby boy in April of that year in Mexico, where regulations are less clear-cut.

As genetic reproductive technologies for screening and modifying our offspring seem to be speeding ahead, their future development and ethical implications will be something that our society as a whole needs to grapple with.

“In the News: First report of baby born with mitochondrial replacement” (October 2016)

Andrew Joseph, “A baby with a disease gene or no baby at all: Genetic testing of embryos creates an ethical morass” (STAT, October 2017)

Julian Quinones and Arijeta Lajka, “‘What kind of society do you want to live in?’: Inside the country where Down syndrome is disappearing” (CBSN: On Assignment, August 2017)

Kat McGowan, “Prenatal Testing is about to Make Being Pregnant a Lot More Stressful” (Quartz, March 2016)

Patrick Skerrett, “Experts debate: Are we playing with fire when we edit human genes?” (STAT, November 2015)

Amy Klein, “Embryo Testing Should Not Be Controversial” (Slate, March 2014)

Ferris Jabr, “Are We Too Close to Making Gattaca a Reality?” (Scientific American, October 2013)