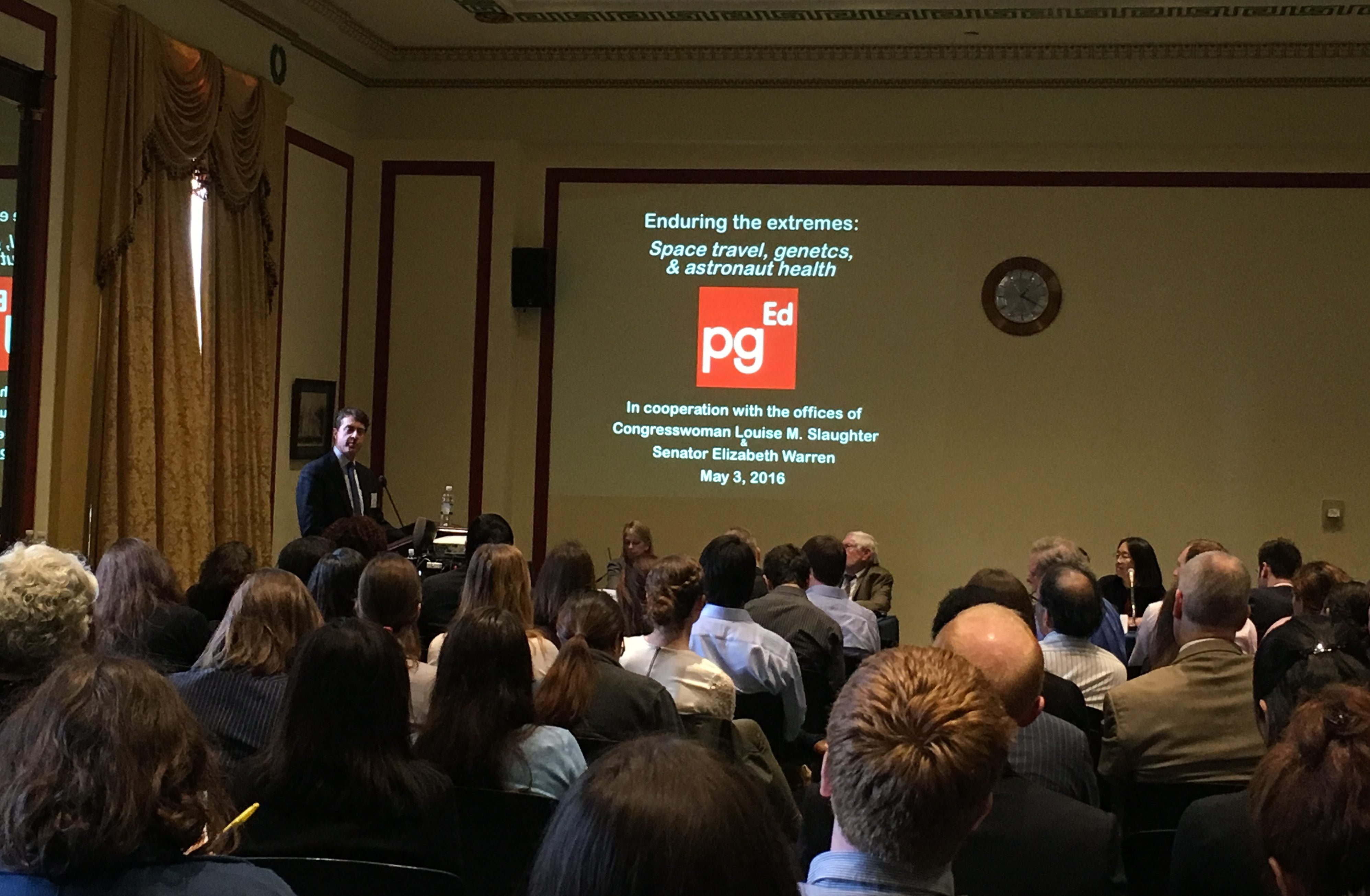 On May 3, pgEd held its fifth briefing on Capitol Hill as part of a series to engage policymakers on the importance of education and society-wide conversations about the promises and implications of genetics.  This program left Earth’s orbit to focus on genetics and space travel, looking at the health effects of spaceflight, potential contributions of genetics to protect the health of astronauts, and the ethical considerations. The standing-room only event was attended by almost 200 staffers from Congressional offices, various government departments and agencies, academic and professional societies, and members of the public. 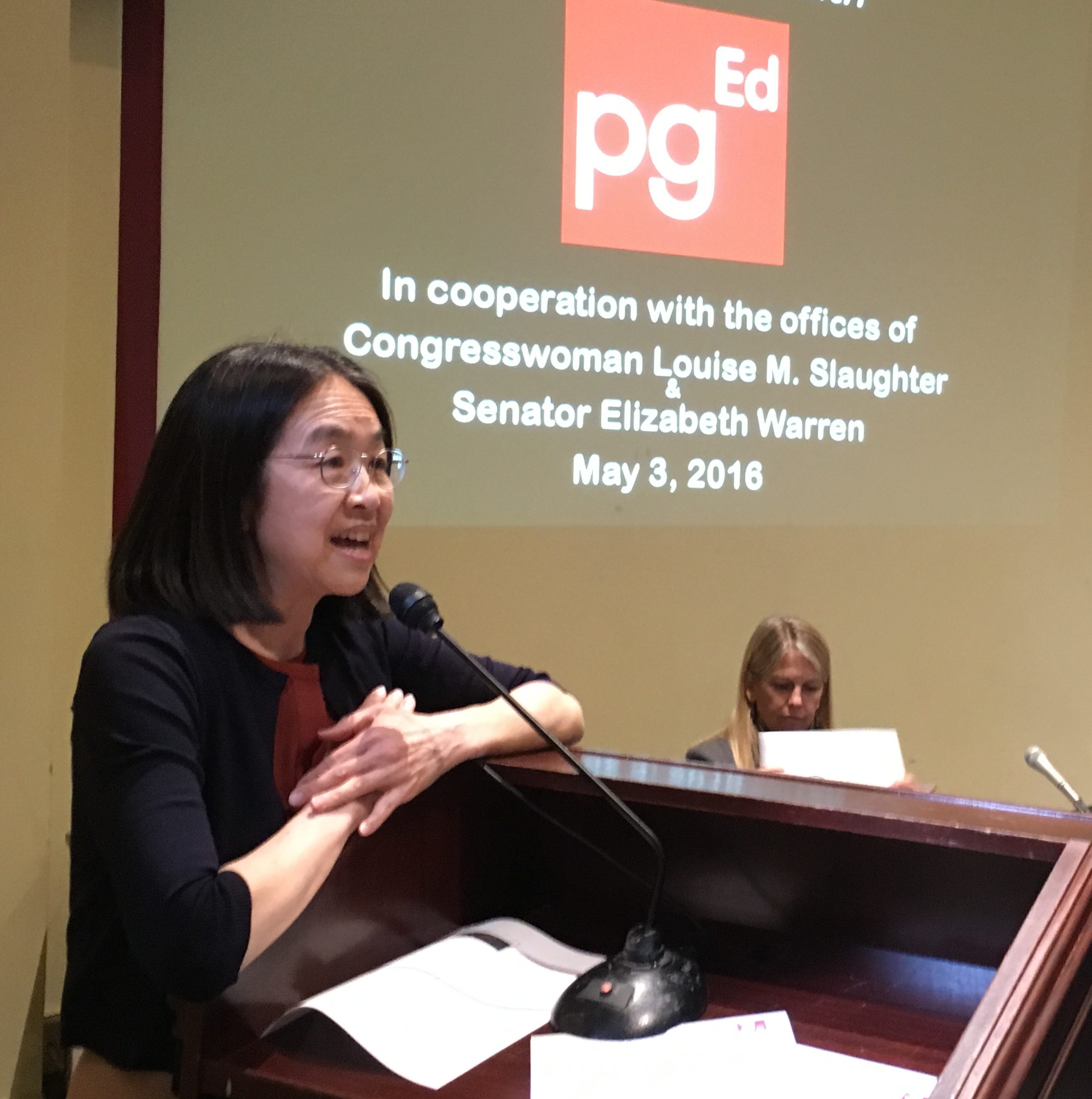 pgEd’s director, Dr. Ting Wu, opened the briefing with the simple question: why space? What connects the seemingly disparate topics of space and genetics? Dr. Wu recounted how the topic helped open doors when speaking with students from underserved communities, where initial anger or mistrust towards genetics gave way to the consideration of the role genetics might play in protecting the lives of astronauts under the perilous conditions of spaceflight. 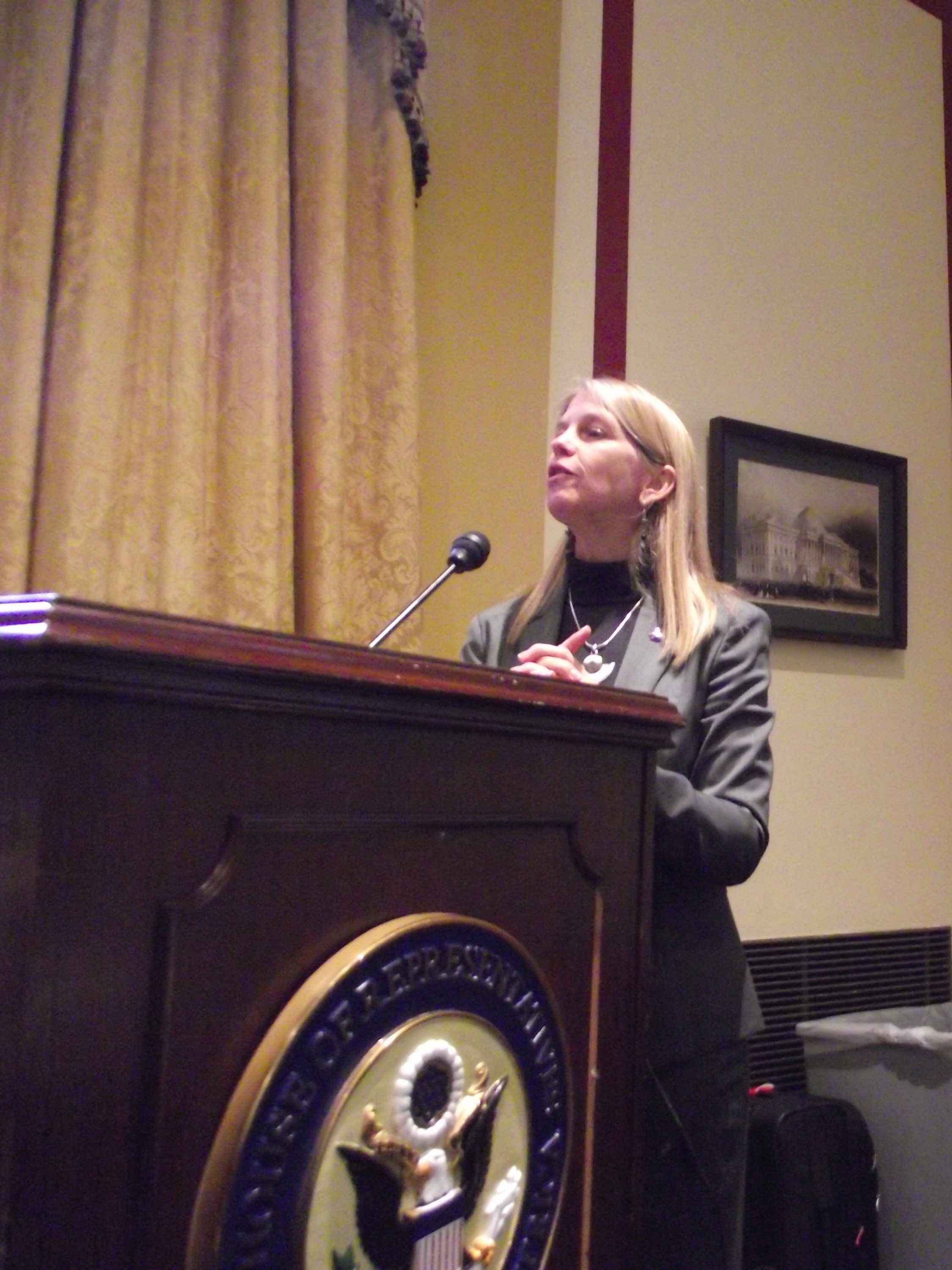 Dr. Dava Newman, the Deputy Administrator of NASA, then gave opening remarks about the agency’s interest in the topic and outlined NASA’s mid- to long-term plan for human spaceflight to Mars. The plan, called the Journey to Mars, is currently in its first phase, having accomplished 16 years of continuous human presence in space. Research is a major focus aboard the International Space Station (ISS); over 2,000 experiments have been performed on the ISS to date, involving 95+ nations. The on-going Twins Study involving astronauts Scott Kelly (who spent nearly one year in space) and his twin brother Mark (who stayed on Earth) is providing a unique opportunity to look in molecular detail at the relationship between genetics, physiology, and long-duration spaceflight. The plan will enter its second phase in the 2020s, which would be the “proving grounds” for technologies such as life support systems and rocket systems. Finally, by the 2030s, NASA hopes to have “boots on the ground” on the red planet. 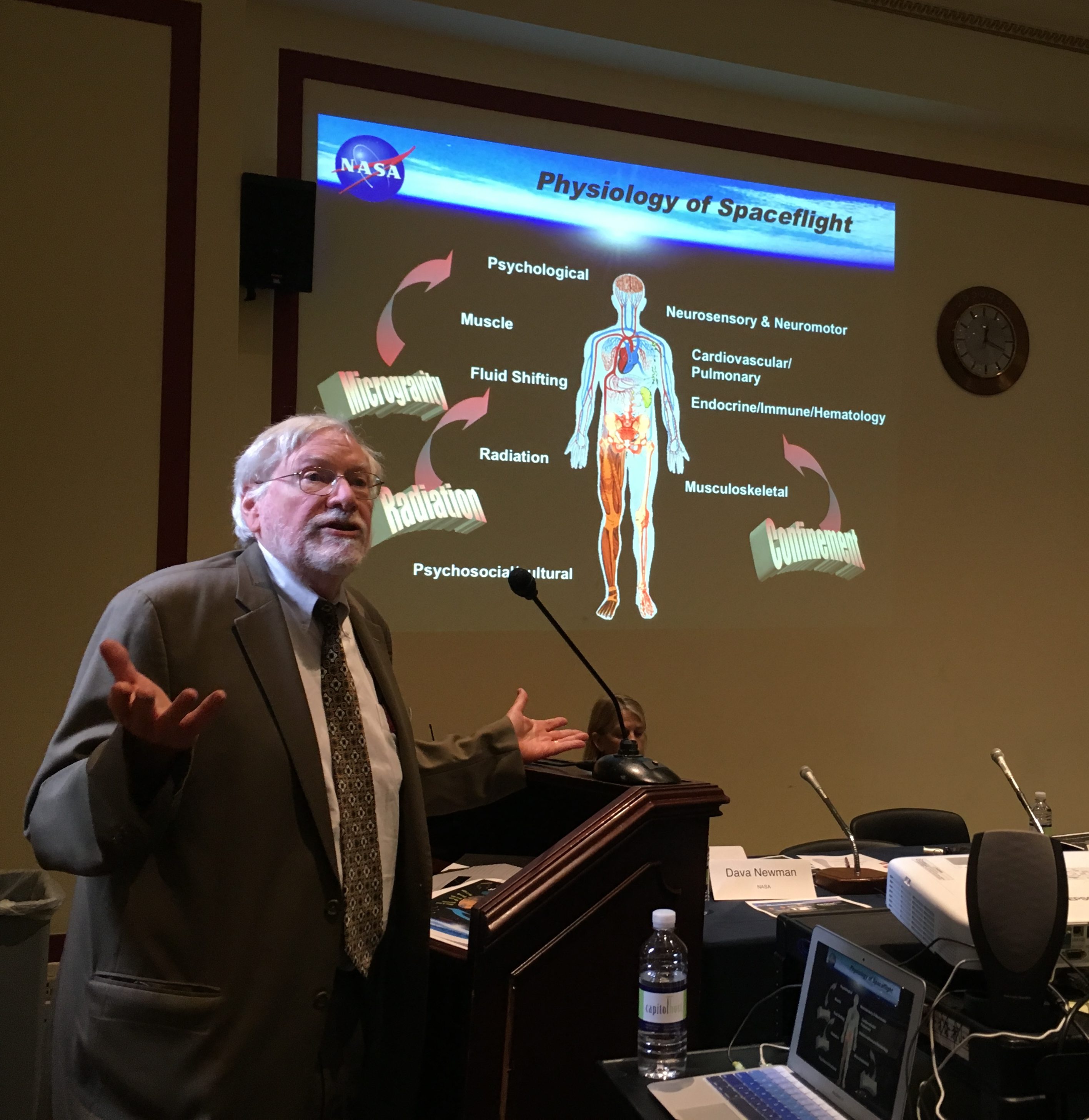 The floor was then turned over to Dr. Victor Schneider, a Senior Medical Advisor at NASA. Dr. Schneider discussed some of the health effects of spaceflight that have been observed and are being studied. He highlighted several critical areas, including increased bone loss (more than 12 times the rate when on Earth), muscle loss (due to much less force being required to move or work in space), radiation (an active area of study, particularly the potential effects of cosmic radiation when astronauts travel outside of Earth’s protective magnetic field), and previously unexpected changes to the eyes. Dr. Schneider remarked on how the Twins Study, initiated by the Kelly brothers themselves, presented a unique opportunity for NASA and academic researchers to collaborate on studying the effects that spaceflight have on physiology and genetics. Biological research in space is also set to become more prominent given NASA’s recently-initiated GeneLab platform, where cells and model organisms (such as plants and mice) are sent into space, in order to study the effects of microgravity on, for example, the expression of genes. Dr. Schneider emphasized that NASA is seeking to apply what is learned from such research to protect the astronauts who go into space and the agency is currently seeking legislative authorization to provide health coverage for astronauts after their retirement so that their needs will be taken care of. Using genetics as a criterion for selecting astronauts for missions would violate existing legislation, including the Genetic Information Non-discrimination Act and the Americans with Disabilities Act. 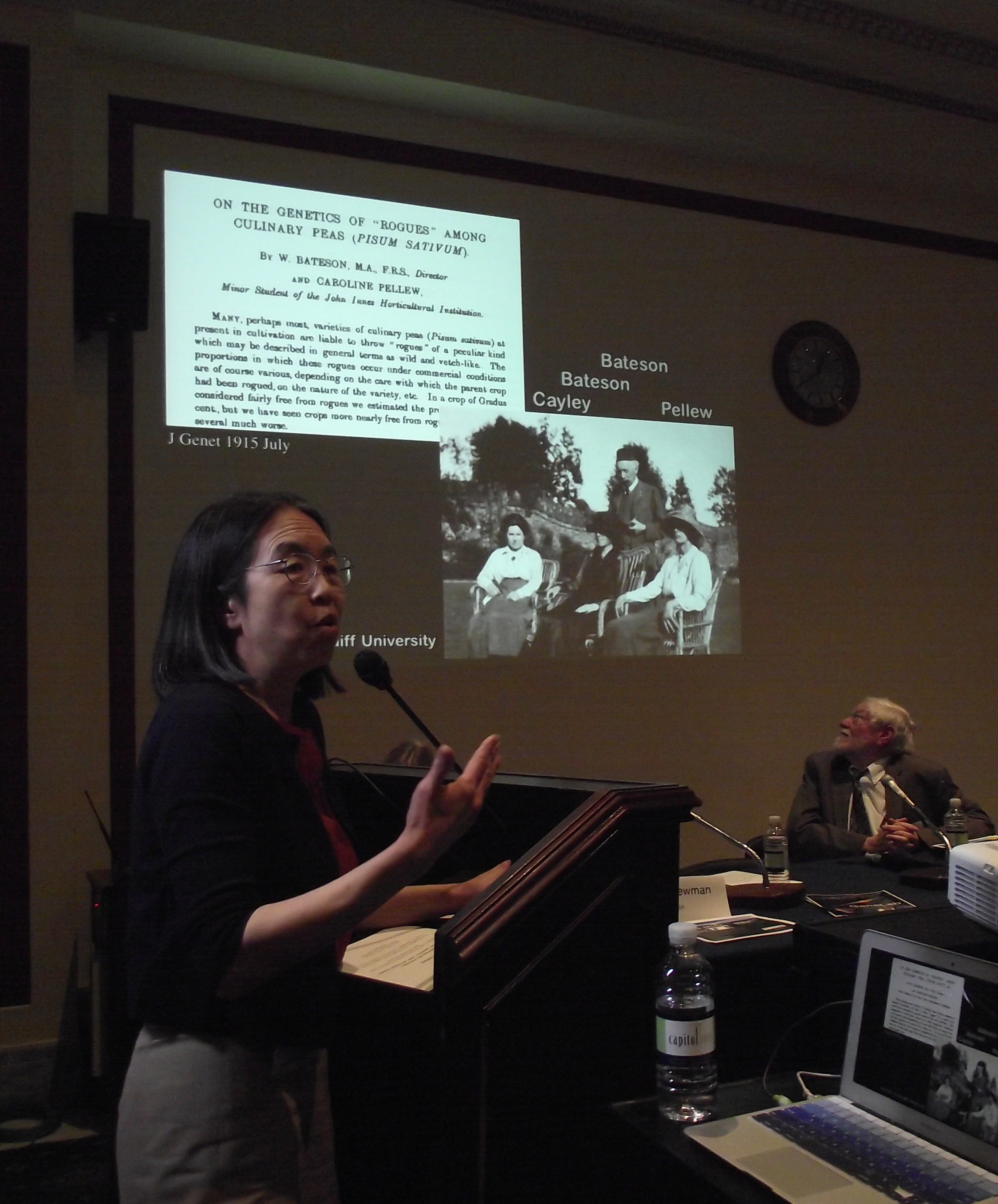 Dr. Wu returned to the podium, speaking as the Director of the Consortium for Space Genetics at Harvard. She chronicled the tremendous advances that have occurred in the field of genetics over the past 100+ years and considered the journey ahead, highlighting several areas where genetics might be useful for protecting the health of astronauts. The first is personalized or precision medicine, envisioning that missions could be equipped with the proper drugs and medical kits based upon the astronauts’ genetic variants that influence how drugs are metabolized by their bodies and which drugs might have undesirable side effects. Similarly, the astronauts’ genetic variants that affect disease predisposition might inform the length and timing of missions, exercise regimens or other lifestyle-related measures while in space. Thirdly, and most speculatively at this point, advances in gene therapy and the discovery of “protective alleles”, which lower a person’s risk for certain diseases (e.g., cancer or Alzheimer’s) or impart “desirable” characteristics such as stronger bones, raise interesting (but ethically controversial) possibilities for introducing these traits into astronauts. 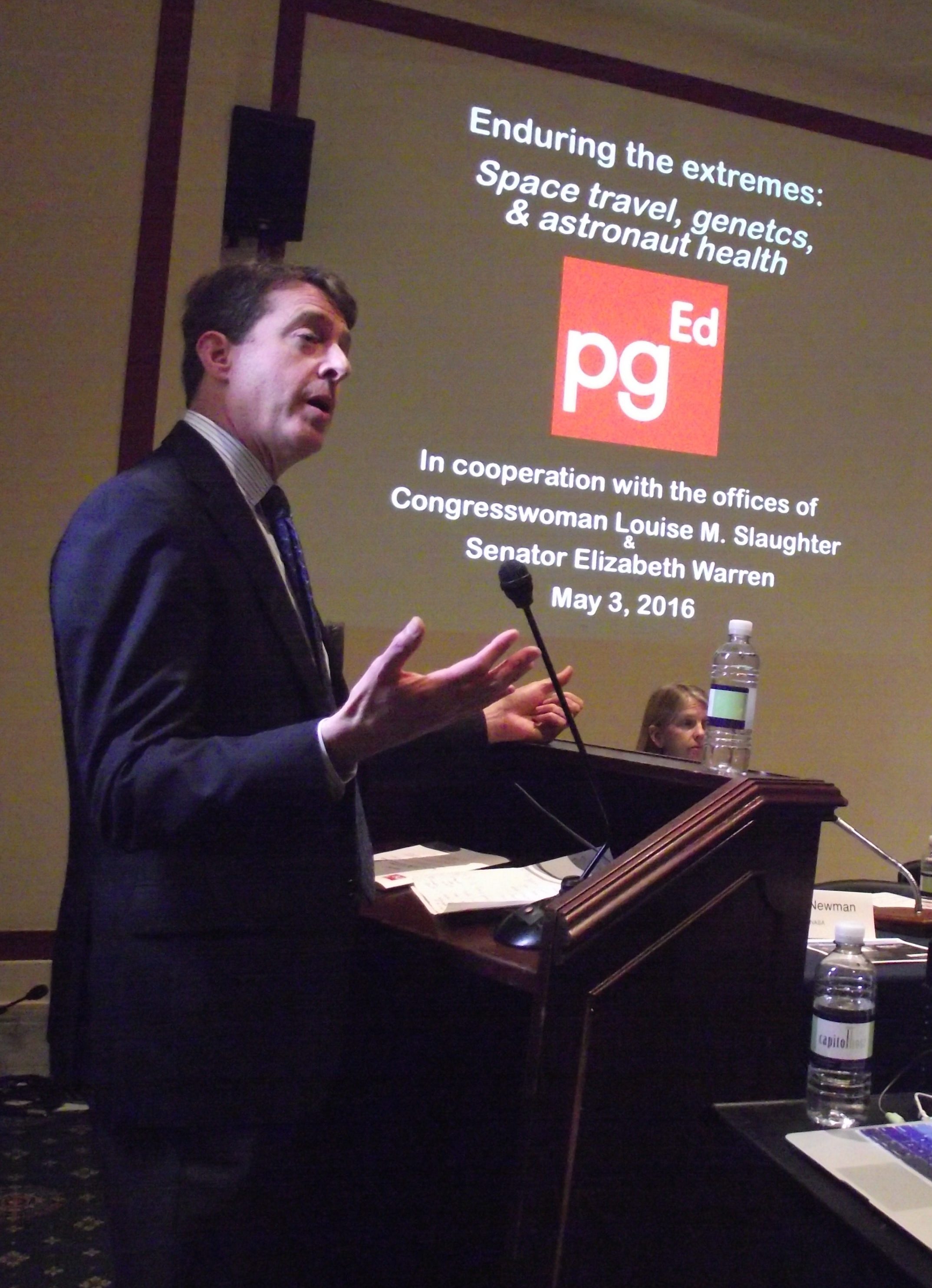 Dr. Jeffrey Kahn, who chaired the Institute of Medicine Committee on Ethics Principles and Guidelines for Health Standards for Long Duration and Exploration Spaceflight, rounded out the briefing by exploring some of the ethics questions surrounding human spaceflight, and tied the topic back to similar discussions around the application of genetic technologies here on Earth. Dr. Kahn pointed out that, while there is currently a set of standards for space travel within low-Earth orbit, there is ongoing conversation at NASA and elsewhere about how these may need to be different for the longer and farther missions beyond Earth’s orbit, such as those to Mars. Questions about uncertainty and acceptable risk would need to be considered, and an interesting conundrum is whether and how the majority of us, who have never been in space, should decide what is right for astronauts who go into space. While astronauts constitute a very special subset of the population, many of the same questions surrounding genetics and ethics apply to astronauts as well as the general population, for example informed consent in health studies or privacy issues related to the disclosure and use of genetic information. Other ethical questions relating to genetic technologies, such as whether and how to edit our DNA, and for what purposes (“cure” vs “enhancement”), also require broad and thoughtful discussion across society. This mission, to inform and inspire conversation, is exactly the reason that pgEd is organizing this series of briefings.