Organized by the Personal Genetics Education Project (pgEd), Harvard Medical School
In cooperation with the Office of the Honorable Louise M. Slaughter, House of Representatives
May 13, 2014 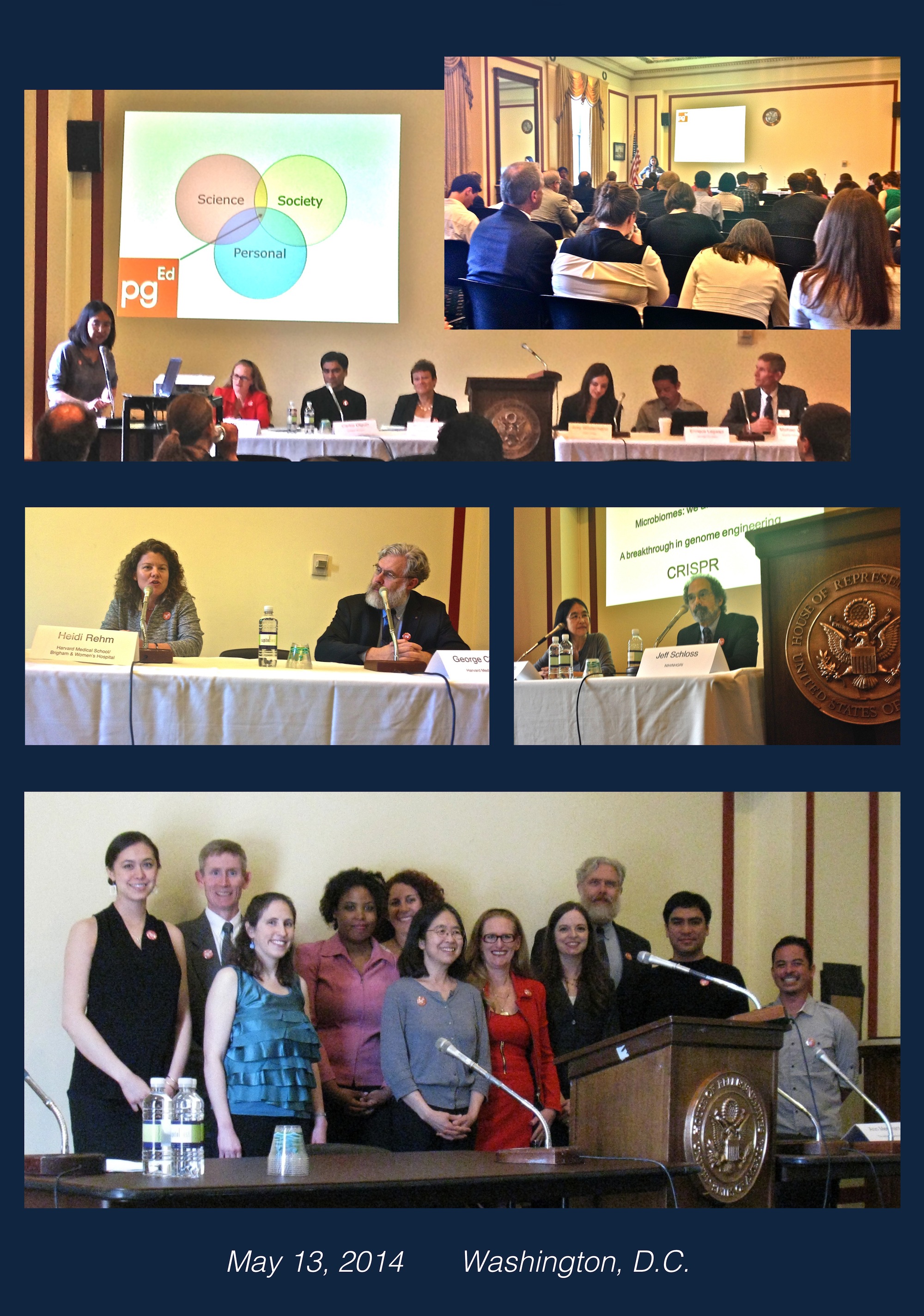 Advancing a new initiative to engage our nation’s lawmakers, the Personal Genetics Education Project at Harvard Medical School was honored to host a Congressional briefing in Washington, D.C. on May 13th focused on the importance of raising public awareness on the rapidly developing field of personal genetics.The energy and the interest for this topic was palpable and, as a result, this briefing served as the launching pad for a series of five briefings to delve more deeply into the intersection of genetics and emerging policy questions.

The briefing highlighted recent developments in the fields of genetics, personalized medicine, and genetic engineering as well as successful strategies for engaging the public. Organized in cooperation with the Office of the Honorable Louise M. Slaughter, House of Representatives, pgEd assembled renowned experts in research, education, and community engagement to address a packed room of policymakers representing Congressional offices and other interested stakeholders offering a wide range of viewpoints. The primary goal of the briefing – sharing emerging scientific opportunities and issues alongside achievable strategies for addressing the urgent need to raise awareness comprehensively across our nation and around the world – was met with resounding success, thanks to our team, our experts, and the thoughtful participation of attendees.

pgEd director and Harvard Medical School professor, Ting Wu, opened the briefing with an overview of the remarkable pace of advancements in the field of genetics as well as the urgency for engaging the public. Wu spoke about her personal experiences visiting high schools and described how stories from the cutting edge of genetics can rivet a classroom. Working through a mock pedigree, Wu captivates students with complexities such as maternal-fetal microchimerism and explains how pedigrees are changing to be more inclusive of individuals’ personal identities and new family structures arising as a result of modern reproductive technologies. Dr. Wu said that pgEd’s goal is to “lower fear and raise awareness, and people seeing themselves represented does just that.”

Wu then joined leading geneticists George Church, Heidi Rehm and Jeff Schloss in a panel discussion broadly focused on the exciting and rapidly changing landscape of genetic research. They were asked a number of excellent questions. Will the sensitivity of new genetic tests create new challenges in fields such as law enforcement? How are genetic technologies affecting patients today? Which diseases will be impacted by advances in personal genetics? The panelists discussed emerging technologies such as CRISPR, which is opening new possibilities for treating disease by repairing mutations via a “genome surgery” of sorts. They also touched on the importance of societal discussions in the public domain as well as the challenges of reaching all audiences through education and the need for a multi-faceted approach.

As an informed and aware population is necessary for the potential of genomic science and personalized medicine to be realized in a safe and equitable way, pgEd’s Marnie Gelbart and Dana Waring discussed strategies pgEd has developed to grab and hold people’s attention while simultaneous putting them at ease. Gelbart shared three of pgEd’s approaches for reaching wide swaths of people: (1) working with the entertainment industry to advise shows such as Grey’s Anatomy; (2) tapping into gaming through Map-Ed (map-ed.org), an on-line game to increase people’s awareness and confidence; and (3) going out and talking with people directly, focusing on high school audiences in particular. Waring shared topics that touch on emerging science but also have deeply personal and broad societal meaning – reproduction, crime and aggression, and how the intersection of genetics and sports is a catalyst for discussion about our potential as individuals and what genetics can and cannot tell us about ourselves.

The briefing closed with comments from a panel of experts at the forefront of education and community engagement. pgEd was pleased to welcome six colleagues with whom we have worked through our GETed conference and other programs to bring a wide range of perspectives and experiences. Ann Merchant and Carlos Olguin spoke about the power of entertainment and gaming to engage audiences. Merchant, speaking on behalf of the Science & Entertainment Exchange, noted the impact of television and film to communicate simple messages that inform and influence millions of people within an hour. Olguin highlighted pgEd’s collaboration with his team at Autodesk Research to expand Map-Ed and unlock opportunities for people to interact with the map, pose their own questions, and share information relevant to their community. Map-Ed has been featured in the Genome: Unlocking Life’s Code exhibit at the Smithsonian Institution, and Patricia Phelps reported on the impact of the exhibit, which has welcomed over 2 million visitors in less than one year. Phelps cited the visitors thirst to learn about genomics, a term familiar to only 16% of them prior to entering the exhibit. Amy Wilstermann and Enrique Legaspi addressed the importance of community engagement. Wilstermann, a professor at a faith-based college, emphasized the value of partnerships between religious leaders and scientists to empower resources for individuals impacted by genetic testing and seeking guidance. Legaspi made stirring remarks about his community of Boyle Heights, the impact of preventable diseases, the need for information, and his successes at the i.am.angel foundation in fueling young people’s creative energy into STEM rather than gangs. Mike Dougherty closed with the message that genetics education is needed at many levels. As the American Society of Human Genetics sets its sights on training healthcare professionals in genomics, Dougherty related a personal story illustrating the urgency to make both doctors and patients aware.